Screw Milkshakes. Bacon brings all the boys to the yard 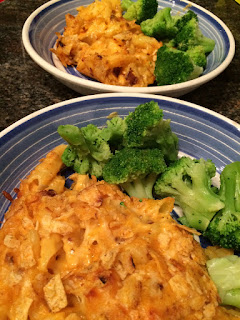 A little over a year ago, my better half and I chose to become plant-based eaters for the most part.  I say “most part” because of Bacon, you can’t just give up bacon.  It’s not meat right?  No, it’s MEAT CANDY .  After being pretty strict for a year, we are now more of  the meat-as-a-special-occasion/meat-on-the-side/what-the-hell-were-we-thinking/bacon-is-always-allowed crowd.  Also I’m pretty sure cheese comes from a plant. I have a wealth of delicious, plant-based, healthy recipes in my repertoire, however this is not one of them.   When you don’t post on your blog for over 4 years (unless you count the dozens of amusing, witty, and very brilliant entries I meant to write down at 3am), you must go big-- not like “Big Salad" Elaine style-- it’s a salad, only bigger with lots of stuff in it , but BIGGER .   Like fancy pants Chipotle Bacon Mac and Cheese.   For those of you noshing sans Gluten , this recipe is easily adaptable.   Ingredients: 6 bacon strips
1 comment
Read more 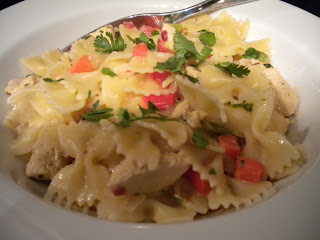 Fat Tuesday came and went. What was I doing? Well, my 35 year old bad self was hanging with my pups, enjoying a glass (or maybe two) of wine, and lamenting that American Idol was not on until Wednesday. When I was in my (mostly early) 20's, Fat Tuesday was a fantastic excuse to party downtown, collecting beads over harmless innuendos, maybe "wooing" (you know like a cheerleader wooooo!) one too many times because it was just TOO much fun! That was when I could actually handle a little something we like to call liquor. And even multiple nights in a row!! During the week!! Well, my excitement over holidays has shifted to excitement over preparing a dish that goes with said holiday. And enjoying the wine. This seems like a good introduction to my recipe, Cajun Chicken Pasta. Seriously, so easy. This week, I've felt very Rachel-Ray-ish (not because I'm using complicated words like EVOO, stoup, sammie, and delish- it's cool Rach, you're still my girl),
1 comment
Read more

Did you miss me? 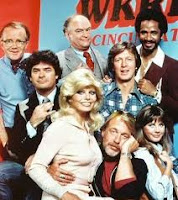 Baby, if you've ever wondered, wondered, whatever became of me....... Well, I'm not the love child of Herb Tarlek and Jennifer Marlowe, living on the air in Cincinnati, delighting in the misadventures of the staff of a struggling fictional radio station.  Nope, I've just been busy I guess. And uninspired. This doesn't mean I haven't prepared/eaten/experienced incredible culinary delights of recent, it just means I haven't shared them with you! HA! The re-cap of said delights includes everything from eating a bacon cookie ( bacon in a cookie ), taking a lovely class on "mastering meats", successfully making Bonefish Grill's Bang-Bang Shrimp at home (sooooo good), and of course, peanut sauce. MMMM. Peanut sauce. This past weekend, with the fabulous weather which graces Seattle (and I'm sure Cincinnati) in February, we were in the mood for winter comfort. For me, comfort food means it's hot, and either carb-y, cheesy, meaty, or starchy
Post a Comment
Read more 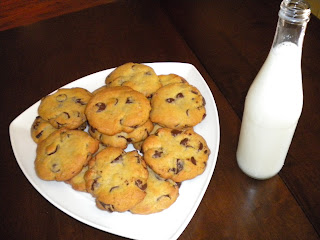 I'll be the first to admit it:  I'm obsessed with all things Martha .  How can you not be-- she's THE female version of MacGuyver. Instead of saving people from dangerous car explosions at just the opportune time using creative genius, she is saving us from ourselves in our kitchens.  Pie crust flat? Chicken too dry? Missing a key ingredient? Martha to the RESCUE.  I've mentioned it before, but I'm a bit of a Sirius satellite radio addict.  And there is just the ONE station I listen to:  yep. Martha Stewart Living Radio.  I recently participated in another of Mario's weekend cooking challenges (he's the host of Living Today on MSLR radio station).  This time the challenge:  The Ultimate Chocolate Chip Cookie! Now, I consider myself more of a cook than a baker .  Basically because I cook more than I bake.  Why is this?  A) I'm a messy, messy cook, and a baking mess is exponentially worse.  B) I may be scarred for life from making a wedding cake 7
Post a Comment
Read more

I just celebrated a birthday, it was the 6th anniversary of my 29th birthday!  How about that?!  Well, I'm not feeling too bad about being smack in the middle of my mid-thirties, especially since the oh-so-sweet 19 year old worker girl at "Game Stop" informed my husband and I yesterday that we are going to be "hot" old people.  YEEEESSSS!  Life is full of little victories......  Another victory is that I have an amazing husband that totally gets me, and my obsession/fascination/appreciation for really really good food.  He surprised me with dinner at the..... drum roll please.... Salish Lodge!  For those of you unfamiliar with the Salish, it is a beautiful northwest lodge that sits just above Snoqualmie Falls, in Snoqualmie, WA and it is very fancy (in the style of "northwest fancy", not like NY fancy).  He reserved a window table, and arranged for rose petals, and a rose to be placed at the table upon our arrival.  So sweet.  There was a newly eng
1 comment
Read more

For the Love of Cooking 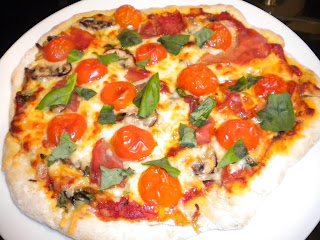 Listening to my favorite radio program recently, this question was posed:  Where does your love of cooking come from?   Callers were citing their moms, grandmas, aunts....  Telling stories of learning family dishes from homelands far away, passing on tricks and tips through generations, preserving hand written recipes by great great so-and-so to keep traditions alive.  It was all so romantic. So I was digging deep, trying to remember that moment, the meal, the person. Visions of hamburger helper , instant mashed potatoes , meatloaf , and TV dinners popped in my head.  As a child of the 70's, and 80's, and a mother who, bless her heart, just doesn't have a passion for the kitchen, I concur that my love of cooking has just come from within.   I am basically an entirely self taught home cook.  There is a cooking " gene " in the family, it's just that the other gene-carriers live at least 2 states away, and always have.  But being free from the confines
Post a Comment
Read more

Is it me, or does this year feel like it's flying by?!! No complaints here, other than the weather in Seattle. I think our January and February were actually nicer than April and May! It may be cold, a little rainy, and way too windy, but it is light out until 8:30 pm. This makes it acceptable to grill and eat spring fare, even if we are bundled up in down coats, and that extra pair of gloves is still in the car! The farmer's market in my neighborhood of Edmonds , WA just opened a couple of Saturday's ago. After perusing my latest copies of Cooking Light, Everyday Food, and Coastal Living, I was inspired to put together menus for the next couple of dinners. Yesterday, I headed to the farmer's market first, with my list of ingredients. I was pleasantly surprised to find that most of the produce was less expensive than the grocery store,  locally grown, and mostly organic. I picked up asparagus, arugula, tarragon, green onion, and basil. It is so fresh and fragrant ,
3 comments
Read more
More posts

Laurie
My Training: I have a combined degree from the University of The Food Network, Martha Stewart, the Internet, and a small library of cookbooks. No formal culinary education, just a passion for cooking, eating, and baking! Sans a Cuisine Diplôma from Le Cordon Bleu, I have plenty to offer from the School of Trial and Error. And error. And error.